West Parish Elementary School and the FIRST DAY of A NEW School!

As the 2016-2017 school year opens, the big story this fall is the brand new West Parish school building! After two years of construction, during which the students were temporarily housed at both the old St. Ann’s School building and O’Maley Middle School, the state of the art, trendsetting $39 million dollar new West Parish is open for the school year! The building is meant to account for the growing population of Gloucester, with room for 350 students and containing total 65,720 square feet compared to the old West Parish’s 40,500.

The new school’s start came in 2009, when Gloucester Public Schools sent a Statement of Interest to the Massachusetts School Building Authority. The plan was resubmitted in 2012, and then accepted. The site went through feasibility studies, schematics, and funding discussions - $15 million will be reimbursed through a state grant, with the city opting to pick up the rest of the tab.

After it was decided that the area behind the old school building was not suitable for building on and the new building would sit on the same footprint, the lengthy process of finding an alternate space to house all the West Parish students for the two year long construction process began, and finally, demolition took place in June 2014 after the end of the school year. Shortly thereafter construction and a public groundbreaking ceremony featuring many local politicians took place. The architecture firm of Dore and Whittier, with W.T Rich as the general contractor, were chosen to complete the project 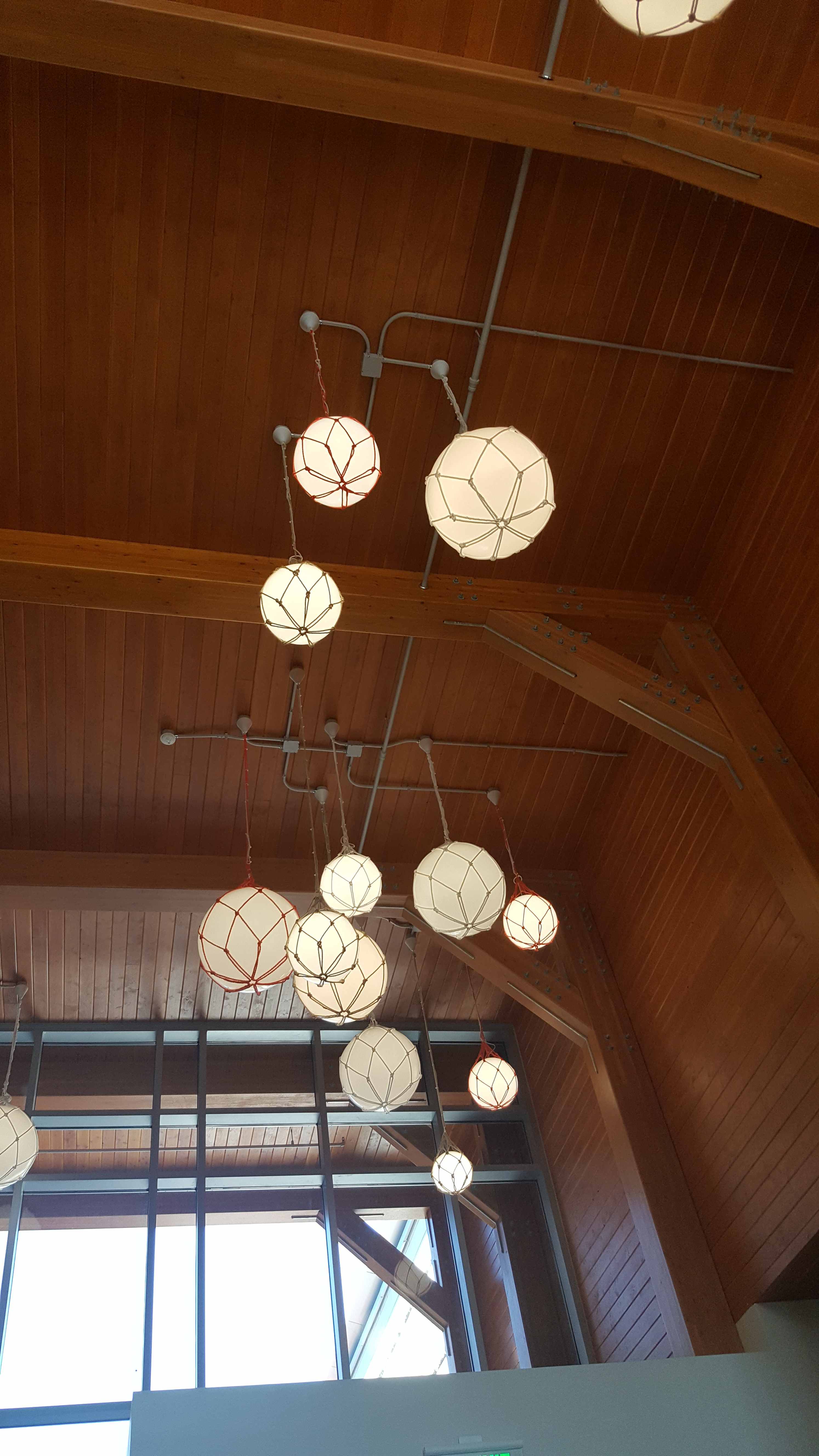 The  main lobby of the building immediately welcomes visitors, parents, and students with a modern nautical theme. Large globe lights are hung by nets, reminiscent of buoys, and the ceiling is made of a warm wooden tone. The large piece of artwork that adorned the original West Parish School painted by local artist Paul Ciaramitaro graces the entryway as well, in a new frame. Much of the design approval was done by the Gloucester School Building Committee. 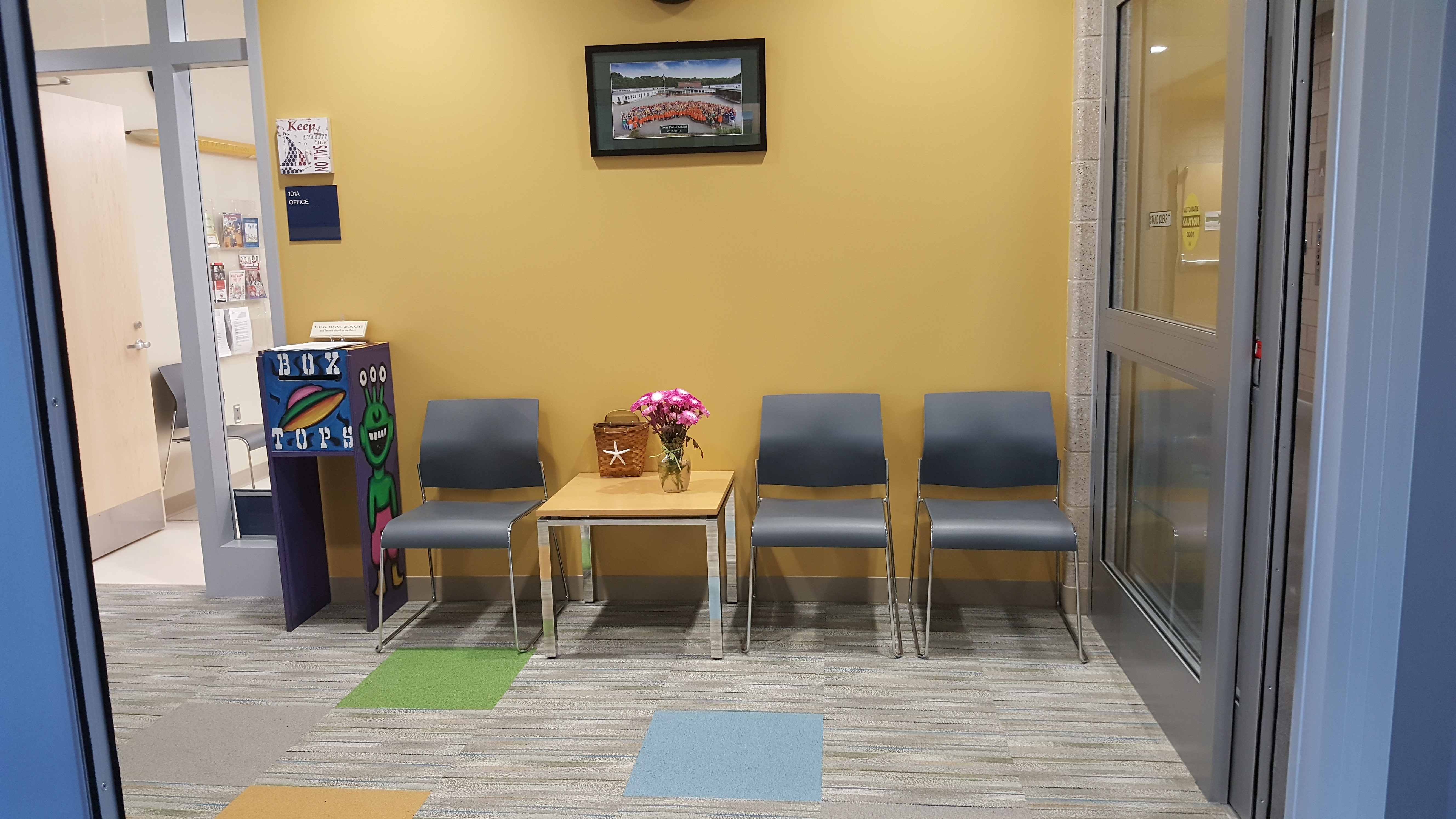 The administrative and office staff are located right inside the lobby entrance, in a colorful and warm office layout that features a modern sliding-glass door and security buzzer system. Security cameras will also be strategically located inside and outside the school to ensure student’s safety and to reduce vandalism. 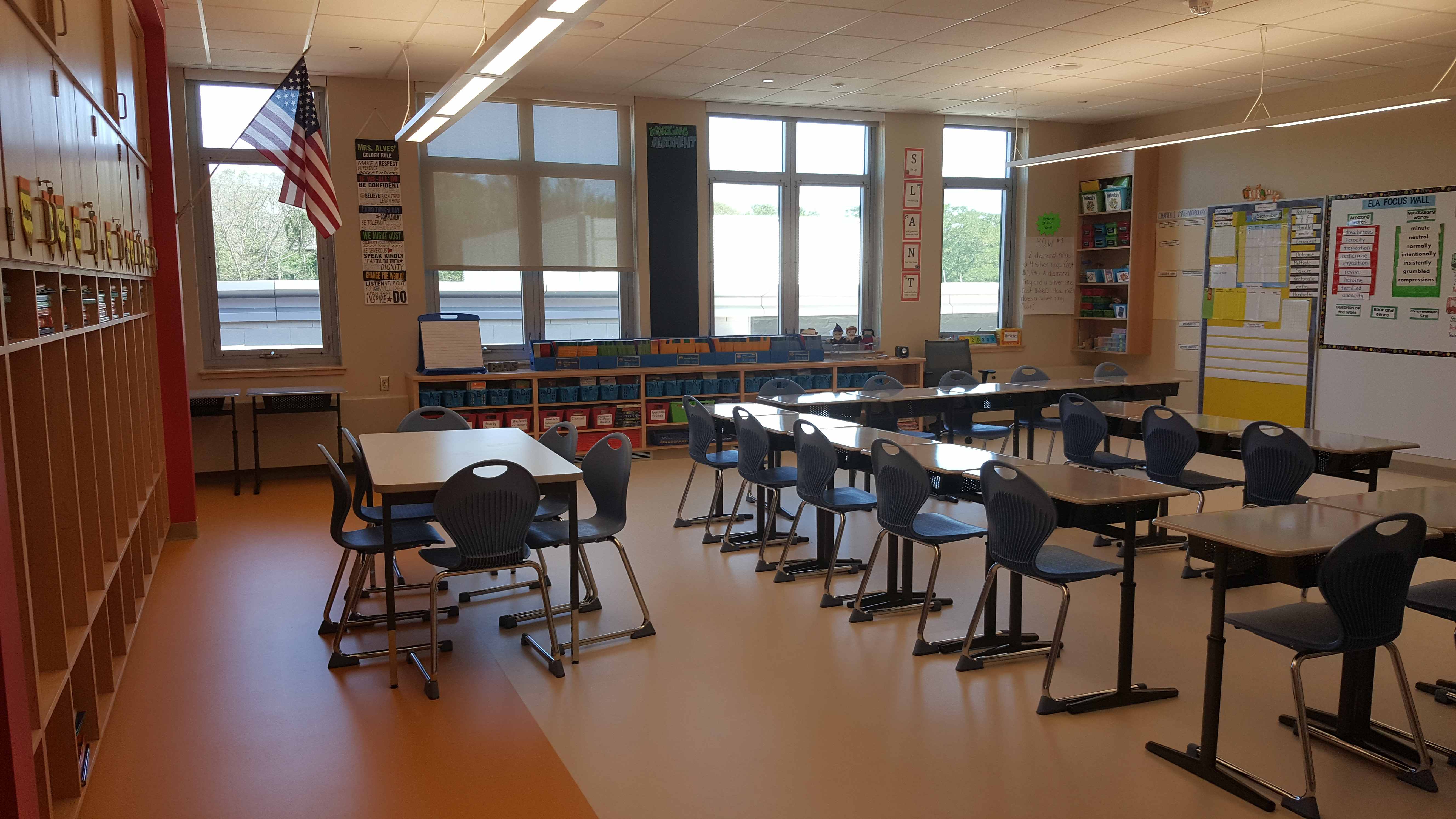 In the new West Parish layout, all of the classrooms are located in one wing of the building. There are 7 classrooms on each floor, each measuring a generous 1,000 square feet of space, with plentiful built-in, floor to ceiling wall storage, as well as teacher’s desks. Six classrooms are for traditional classrooms, with one on each floor specifically modeled and outfitted for special education needs. All of the rooms have state of the art overhead projectors and communication systems. 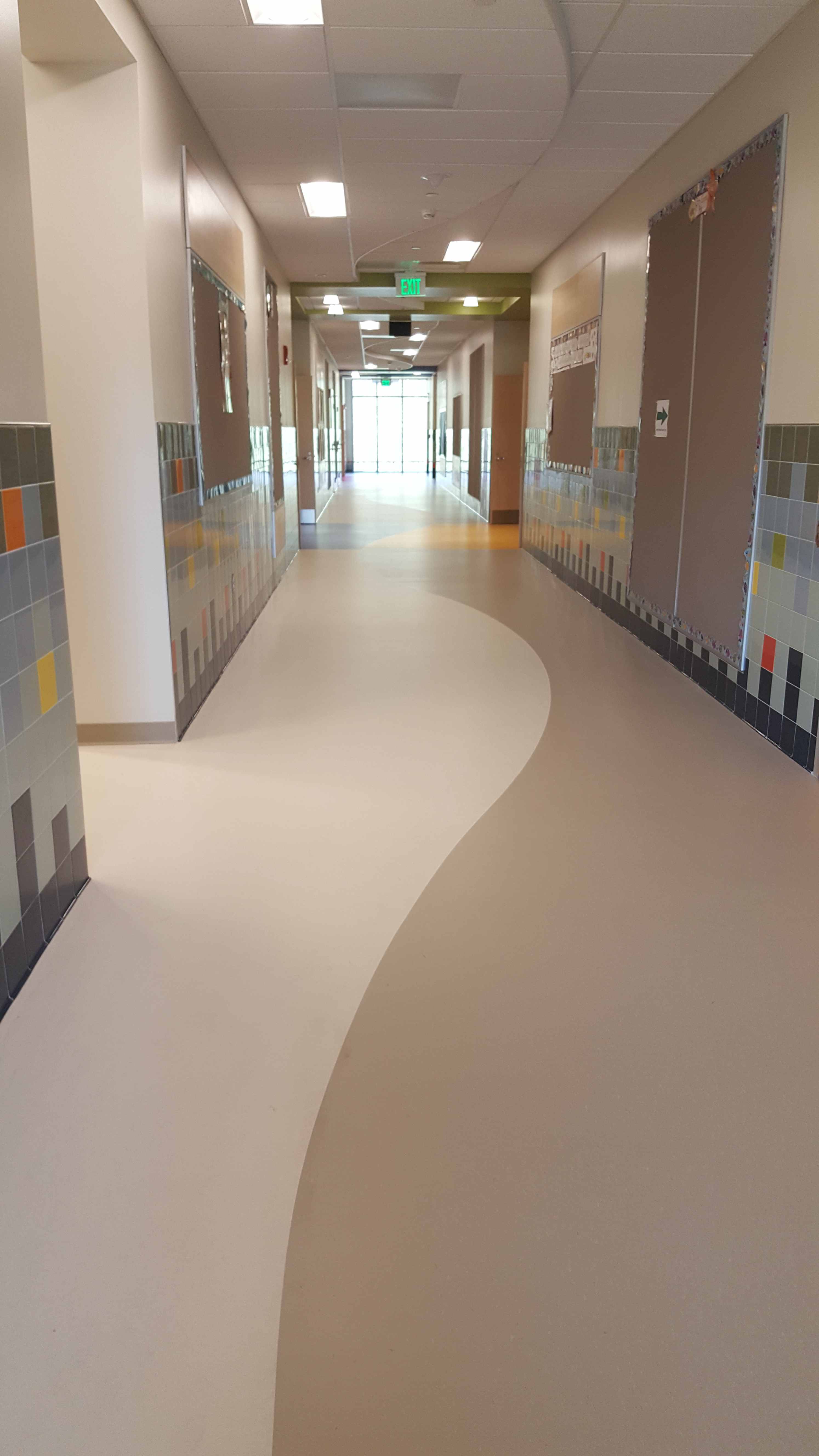 The wide hallways of the classroom building are lined with colorful tile that continues on the muted nautical theme, with light blue deepening to darker blue at the floor level to signify the depths of the ocean. The floor has a two-toned wave pattern, with a matching wave in the ceiling. The hallway areas are unique in that the cubbies for students’ personal belongings are located within the classrooms, which keeps the hallways full of natural sunlight, clean, and uncluttered - with plenty of wall space for hanging displays of student’s artwork and projects. 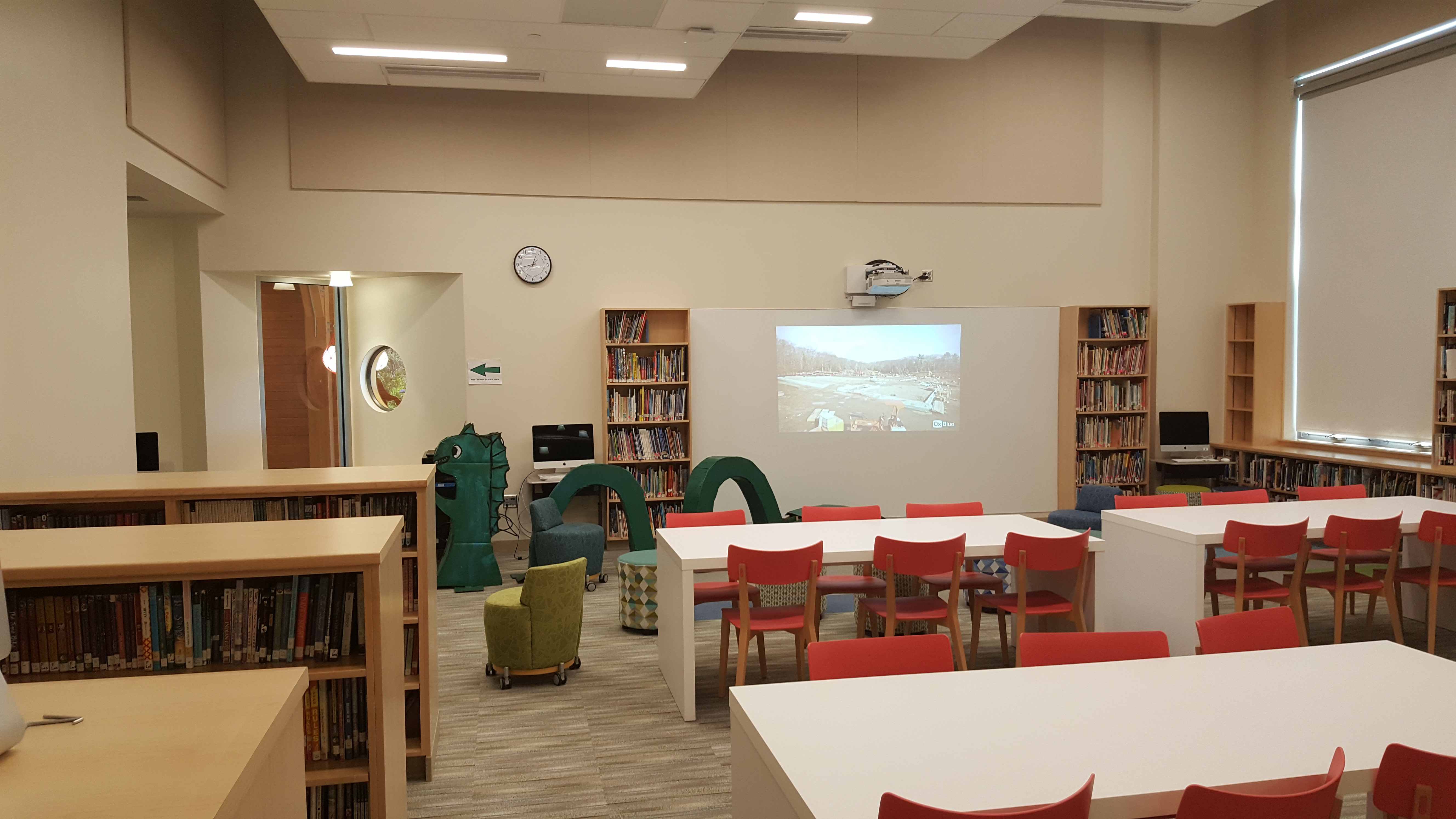 The school’s library is flanked by two-story oversized windows that let natural light beam into the space, which is divided into a reading area and lounge, and a computer lab and media center. The offices of the school’s two speech pathologists as well as the literacy coach are located off the library as well. 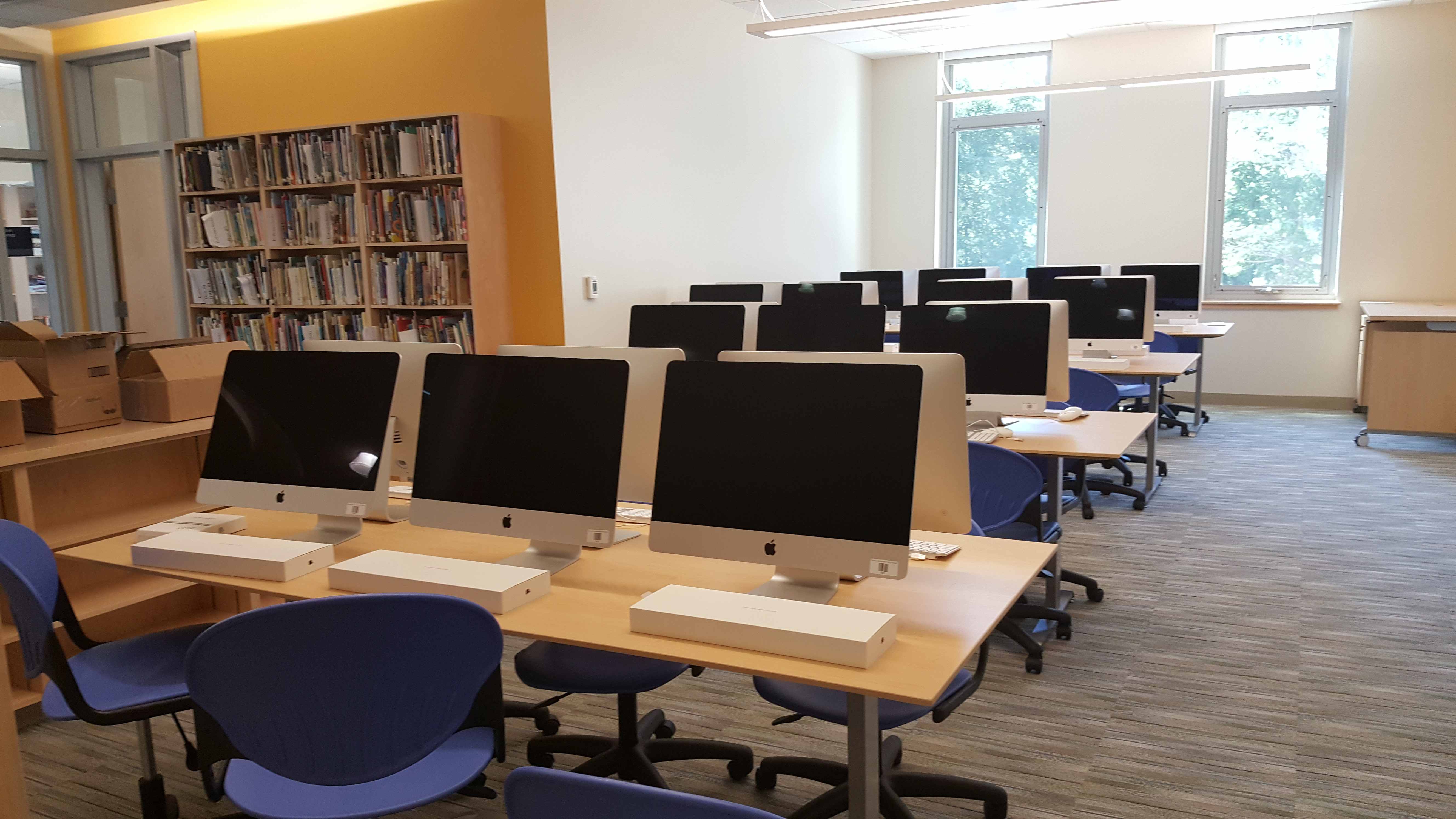 In the public and community-based wing, the art and music rooms are not only spacious, but also bright and airy, continuing upon the design focus of natural light and oversized windows. Both rooms are centered by a large, peaked skylight.

The art room has track lighting and is modeled with many elements of a professional art studio - including wall to ceiling storage space. The music room is flexible, allowing for the music education staff to not only spread students out, but also allow them room to dance! Modern acoustical design means that those outside the classroom aren’t disturbed by children’s exuberant use of the instruments provided - and the strategic location in the public wing of the building means the least disruption to those in the classrooms.. 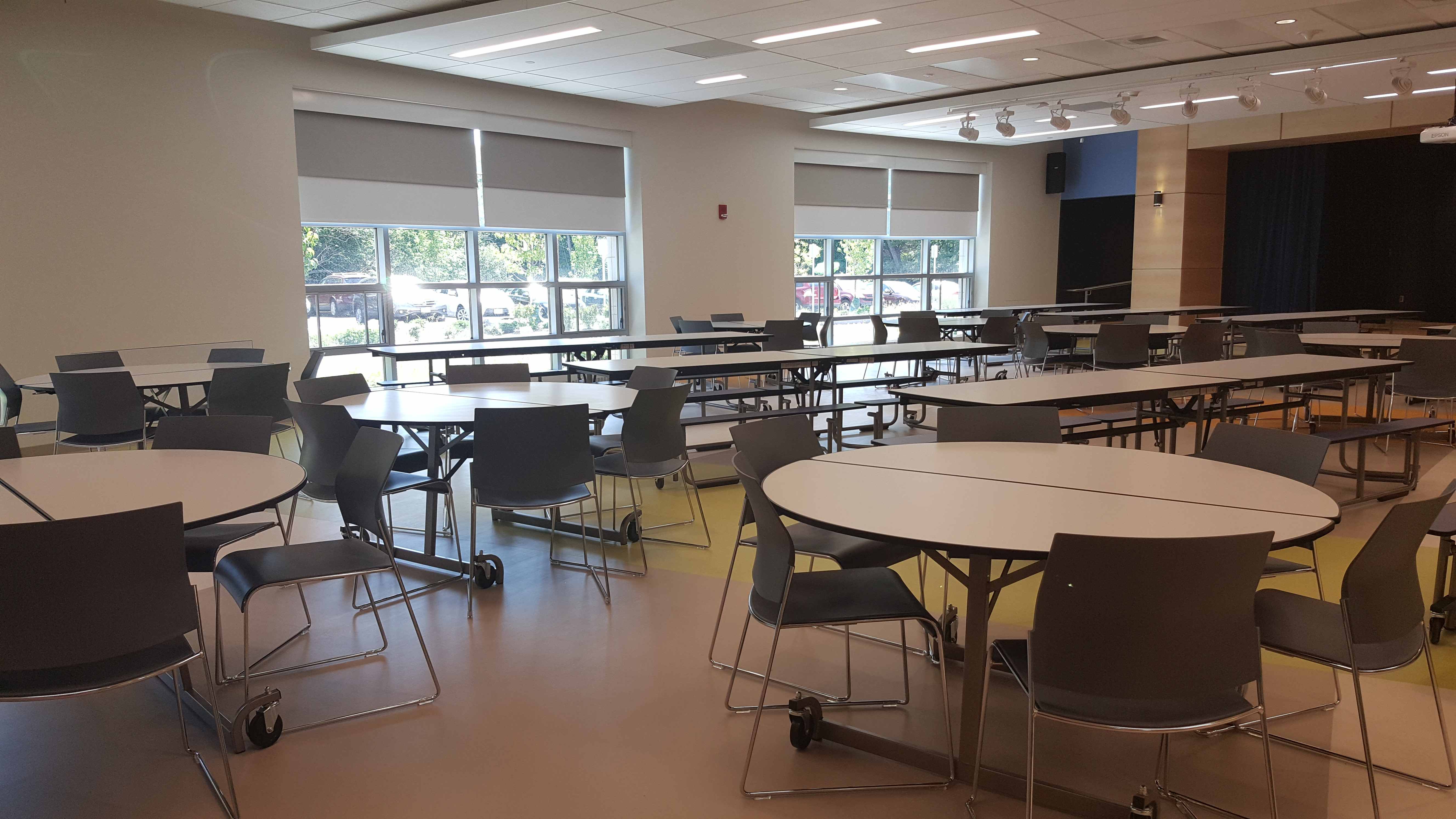 Another major component of the new school is the multi-functional cafeteria and auditorium performance space. The space is comprised of a large area - around 6,000 square feet- for breakfast and lunch setup and before and after school programs. A platform stage with a black walled background edges the area, with a room behind it that can work as either table and chair storage, or as a green room for performances such as the yearly 5th grade play sponsored by Gloucester Education Foundation. The music room is also directly adjacent, in order for students to transition to the stage with ease. 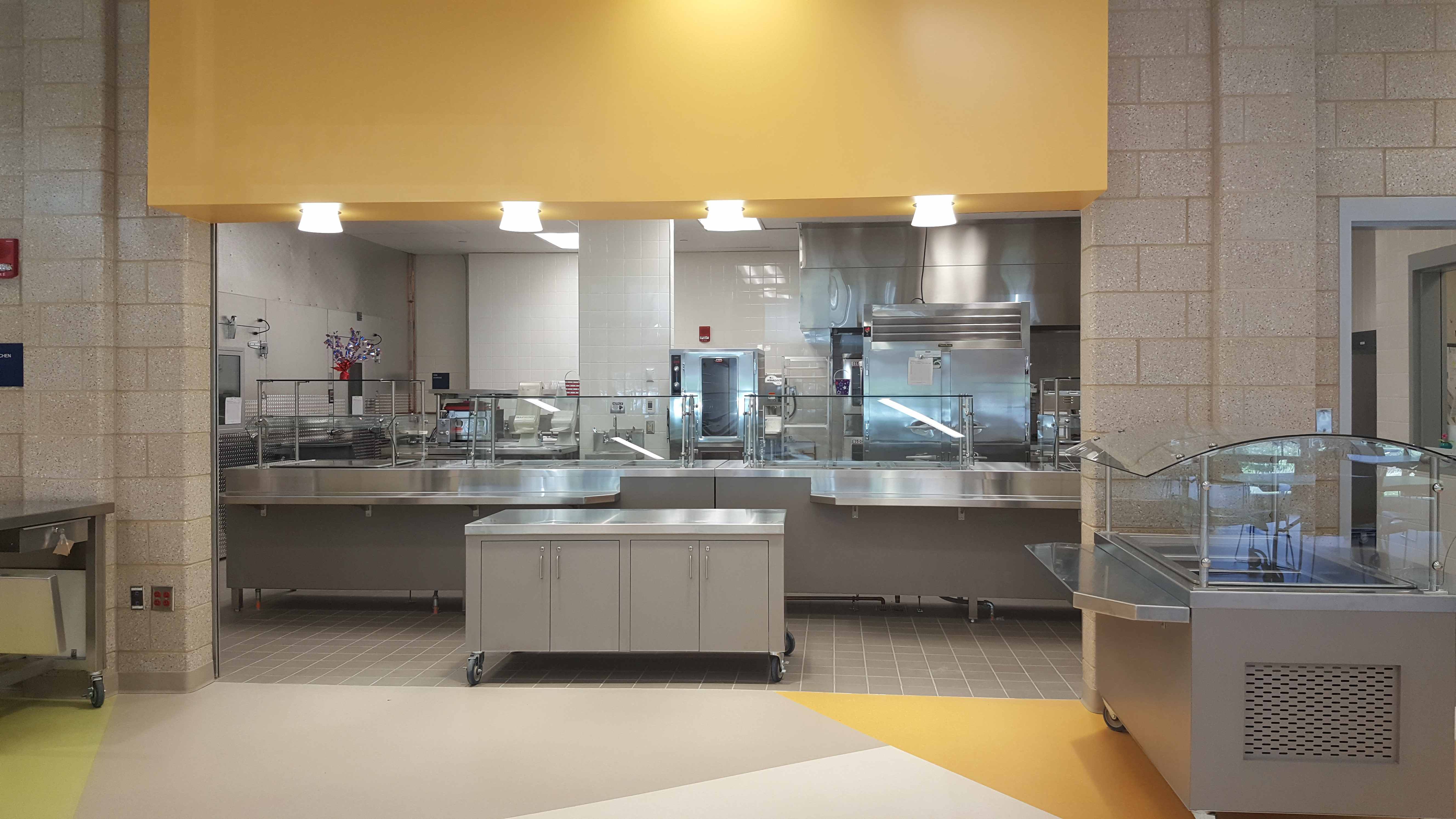 The food service portion of the lunch room, made to serve the incoming 350 students, is aesthetically pleasing, outfitted with stainless steel appliances and steel and glass serving areas. It’s more reminiscent of a brand new college cafeteria. Nearby is a large staff dining area, with a mini kitchen and oversized, floor-to-ceiling windows that allow staff to keep an eye on the youngsters while they dine. 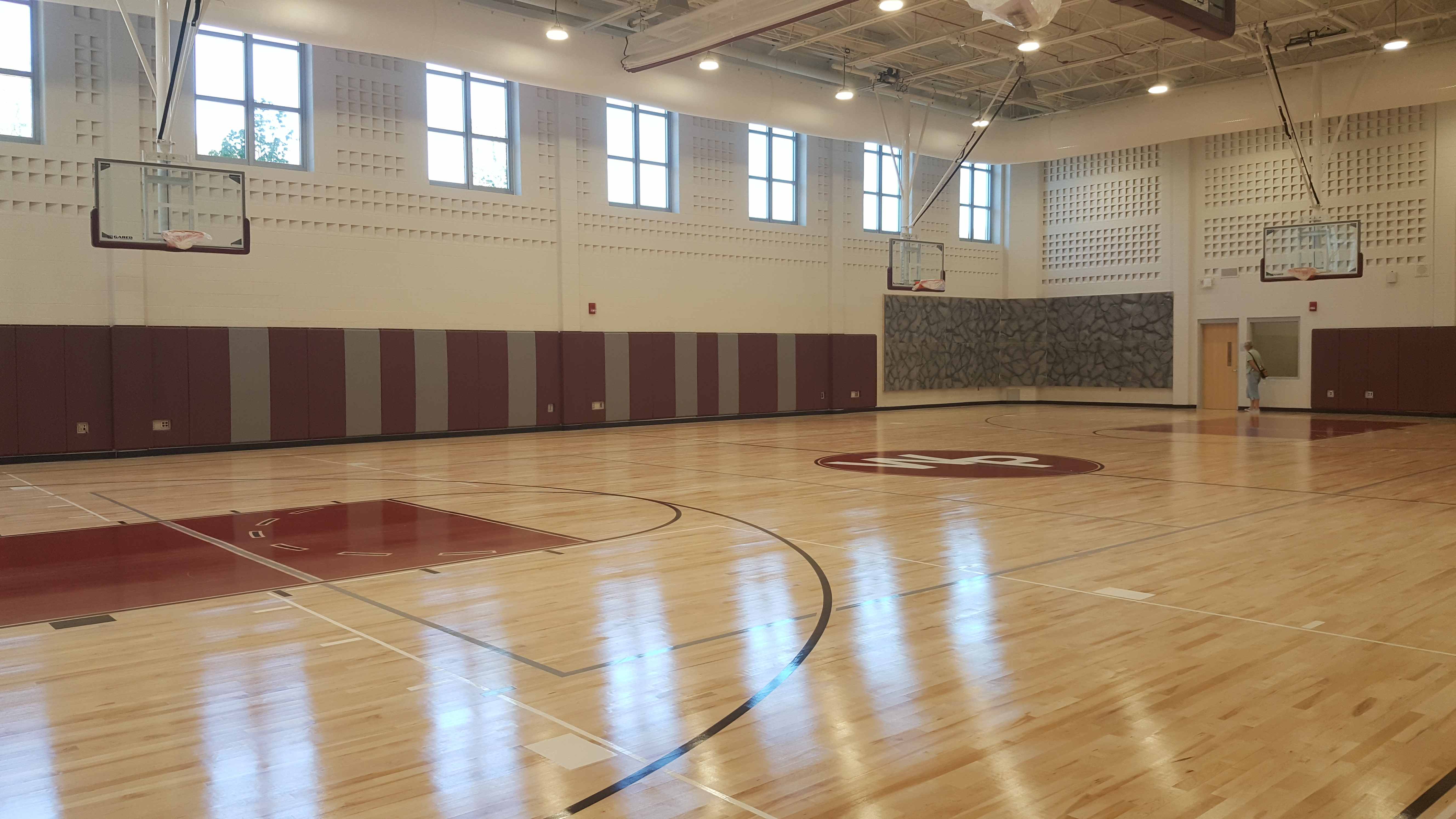 The public wing also contains a full-sized (adult sized!!!!) gymnasium, another of the building’s exceptional features. Again, natural light keeps the area bright, and the nautical theme is continued with a large circular “porthole” style window. Acoustical blocks provide a dampened environment for sound, which is a distinct advantage over the traditional loud gymnasiums of decades past. The gym has one regulation size basketball court, as well as two side courts and a volleyball court. Dr. Safier aims to not only have the gym used by the West Parish community, but also other community groups and teams .

The project has a sustainable, earth-friendly side as well, with LED lighting that automatically turns off when the classroom is not in use. The water bubblers feature a “bottle counter” that represents the number of single-use bottles saved by using the reusable bottle filling system. Instead of an energy-heavy air conditioning system, the classrooms are kept comfortable through the use of an advanced dehumidifying system. Bio-retention ponds and sustainable, beautiful outdoor landscaping help divert rainwater from the asphalt back into the groundwater table. Best of all, the building will be LEED Gold certified! Another community benefit is the school is outfitted as an emergency center and offers back up generators in case power outages are part of an emergency situation.

While the interior of the building is state of the art and visually pleasing, the outdoor area has been overhauled as well. The parking lot flows far easier than the old school, with a much-needed separation of student pick up and drop off areas and bus loading zones.

The previous school’s innovative Science Park playground has gotten a small facelift thanks to the PTO, and there is also a new playground space in the rear of the school. The new space is large enough to hold 120 students, with three slides, climbing wall areas, and fine motor skills and mobility challenge areas, grounded by colorful foam matting. The new portion of the playground is handicapped accessible, so no children are left out of the fun of outdoor play. A softball and full length football field, as well as outdoor basketball court, are nearby and will be ready for use in fall of 2017, after the grass takes root.

What do you think of the new West Parish School? Add to our conversation on Facebook!